Trim Levels of the 2018 Honda Pilot

The Pilot’s baseline LX trim level stands out for its dependable drivetrain, its large array of standard convenience features, and its low price of just $30,900 MSRP for 2WD models.*

3.5L V6 Engine: The Pilot’s standard V6 engine has been designed with direct fuel injection, a drive-by-wire throttle system, and an active control engine mount system. It produces 280 hp and 262 lb-ft of torque. 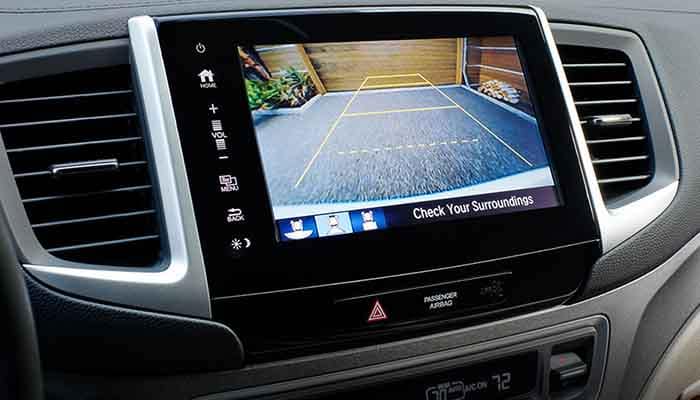 Multi-Angle Rearview Camera: A multi-angle rearview camera with guidelines comes standard on every Pilot LX. Its wide-angle, normal, and top-down viewing modes make it easy to maneuver in tight spaces.

Push-Button Start: In the Pilot LX, you’ll be able to fire up your engine with the press of a button. Illuminated steering wheel–mounted controls also come standard, so you’ll have all the controls you need right at your fingertips.

The Pilot’s EX trim level is priced at just $33,330 MSRP for 2WD models.* The inclusion of numerous safety, entertainment, and connectivity features makes this trim level a great choice for the growing family.

Honda LaneWatch: By connecting a small camera to the passenger-side mirror and displaying the feed on a centrally located console screen, the engineers and designers at Honda have made it easy to track activity in your blind spot. The LaneWatch safety technology goes to work automatically when you activate your righthand turn signal.

Smartphone Integration: Drivers will be able to link their EX to a compatible smartphone using the HondaLink app, which can generate service reminders, remember your parking location, and store detailed vehicle guides. An SMS text message function also comes standard.

8-Inch Display Audio System: The Display Audio touchscreen in the Pilot EX lets you centralize the controls for all the features and settings that you use each day!

The engineers and designers at Honda have outfitted the Pilot’s EX-L trim level, priced at $36,760 MSRP for 2WD models,* with a host of comfort and style upgrades that you and your passengers are sure to appreciate.

Leather-Trimmed Features: Getting more out of your time on the road isn’t difficult when you travel in style. The Pilot’s EX-L trim level has been designed with classy touches including a leather-trimmed seating, a leather-wrapped steering wheel, and a leather-wrapped shift knob.

One-Touch Second-Row Seats: These one-touch second-row seats move from side to side in order to allow easier access to the Pilot’s third row. This trim level also sports a four-way power-adjustable front passenger’s seat, which appears here alongside the 10-way power-adjustable driver’s seat from the EX.

Power Tailgate: You can open the Pilot EX-L’s power tailgate using nothing but your key fob, thereby maximizing the utility offered by this SUV’s expansive cargo bay. What’s more, you’ll be able to greatly expand the cargo space using your 60/40-split three-row bench seat, standard on every trim.

The Honda Pilot’s Touring trim is ready for anything. Priced at $41,970 MSRP for 2WD models,* it comes with more entertainment, connectivity, and utility features than you’ll know what to do with. Additionally, the Honda Sensing safety package comes standard.

9-Speed Automatic Transmission: You can get the most out of your Honda Pilot’s 3.5L V6 engine with a 9-speed automatic transmission, shift-by-wire technology, and paddle shifters. All come standard on Touring models.

Those who won’t settle for anything less than the best will find plenty that excites them in the high-end Elite trim level. The Elite is priced at just $47,470 MSRP.*

Blind Spot Monitoring System: The Pilot Elite’s blind spot monitoring system uses two sideview-mirror-mounted indicators to keep you aware of any activity in your blind spots. A rear cross-traffic monitor also comes standard, so you’ll enjoy similar protections when you’re backing out of your driveway or maneuvering around a parking lot.

Intelligent Variable Torque Management AWD: Although I-VTM4 AWD is available as an upgrade on every trim level, it’s offered standard in the Pilot’s Elite trim. With AWD, you’ll enjoy superior control and performance wherever you go, and you’ll be able to take advantage of Intelligent Traction Control in the snow, in the sand, and in the mud!

Get Behind the Wheel!

Now that you’ve got a sense of what the 2018 Honda Pilot’s trim levels have to offer, it’s time to take your favorite model for a test drive! Contact us today to learn more about our current offers and to schedule an appointment at your local Hampton Roads Honda Dealer. We can’t wait to put you behind the wheel!