Recent advances in Honda technology features have set the current lineup of vehicles available at Hampton Roads Honda Dealers even further ahead of the competition. Amenities like Apple CarPlay and Android Auto connect your smartphone seamlessly with the infotainment system, HondaLink takes telematics to new heights, and Honda Sensing features help make Honda vehicles even safer.

We think the best way to show off these new tech features is to put you behind the wheel so you can experience them firsthand, but in addition to looking at competing cars’ tech offerings (like our review of 2016 Toyota Corolla technology), we have an overview of what each of these pieces of Honda tech does for a new vehicle.

Bluetooth has been available in cars for years now, but it’s only been recently that it could do more than take care of phone calls. Many drivers know the struggle of a phone and a car simply not getting along, but that becomes a thing of the past with features like Apple CarPlay and Android Auto, optimized for the most popular smartphones on the market.

You’ll find Apple CarPlay and Android Auto on new Honda vehicles with a Display Audio touchscreen interface, like Accord EX and Civic EX (and higher) trims. 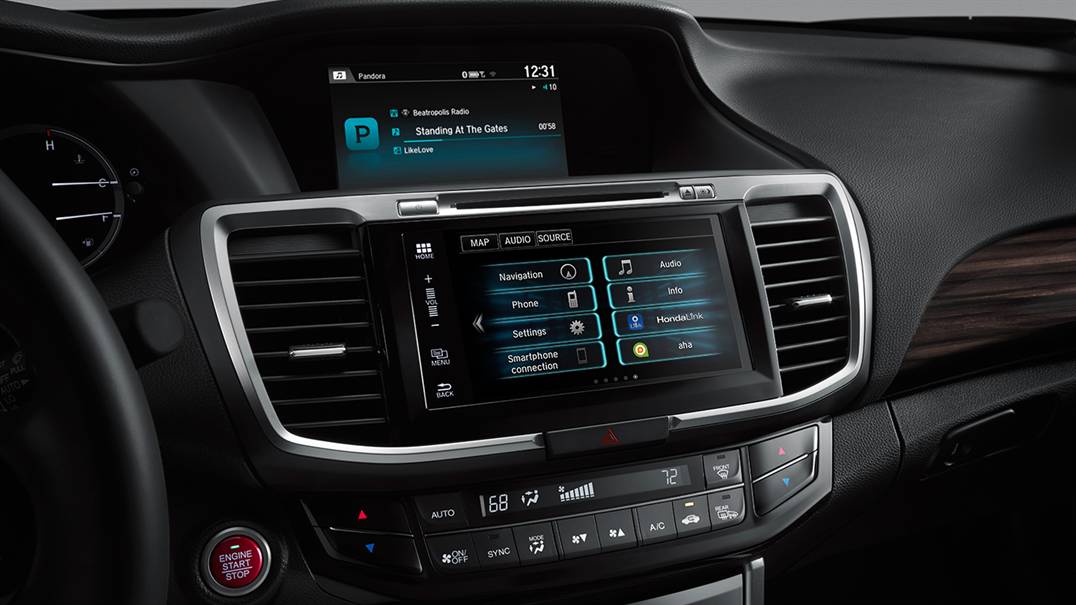 While Apple CarPlay and Android Auto work to give your phone and vehicle a seamless connection, HondaLink brings apps that are optimized by Honda for use in your vehicle and on your phone. HondaLink includes an app launcher as well as exclusive and approved third-party apps that include:

HondaLink can be found as an available feature on many new Honda models, from the Civic to the Pilot.

In addition to the standard and available connectivity features of the lineup, Honda technology offers new kinds of safety with the Honda Sensing system. Adding onto features like traction and stability control and the standard multi-angle rearview camera, Honda Sensing is a collection of driver assistance and accident prevention features that can be added onto select new models.

Lane Departure Warning: This safety system looks at the markings on the road and notices if they start to move left or right, indicating that you might be drifting. If it senses a potential lane departure without signaling, it will give you an audio and visual alert to bring your focus back to driving.

Lane Keeping Assist: Sometimes the warning of the Lane Departure Warning system isn’t enough, and if your Honda notices you’re moving away from the center of the lane, it can give you a nudge back to where you belong.

Road Departure Mitigation: Active at speeds of 45-90 mph, this safety feature keeps you from drifting to the shoulder and off the road, vibrating the steering wheel and even adjusting torque or brakes to keep you from going off-road.

Adaptive Cruise Control: By using radar technology, this system monitors the speeds of vehicles in front of and behind you to automatically adjust cruise settings so you don’t have to start and stop cruising to adjust speed.

Forward Collision Warning: Those same radar systems for the Adaptive Cruise Control system keep an eye on the car in front of you and whether it’s getting too close. If it senses a possible collision, this system issues a warning before signaling the Collision Mitigation Braking system.

Collision Mitigation Braking: This is your Honda’s last attempt to avoid an accident; if it senses you haven’t responded to a possible collision, it can apply the brakes to slow or even stop your vehicle.

Honda Sensing amenities are available on every trim of the Civic and Accord while CR-V and Pilot models have the features available on select trim levels.

For an idea of how the latest Honda technology compares to a competitor, we have a review of the 2016 Toyota Corolla that pits it against the Honda Civic. See for yourself what sets these two small cars apart.

If you have any questions about the latest Honda features or want to see what these new tech amenities are all about, stop by a Hampton Roads Honda Dealer near you today for a test drive.